Enhancing the Protection of Women Journalists in Asia 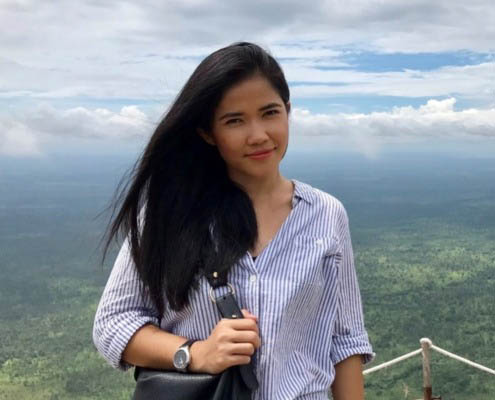 PHNOM PENH, Cambodia (12 June 2021) – As a journalist working in Cambodia, Kann Vicheika knows first-hand the challenges of gathering information and publicly reporting in a country where deep concerns have been expressed by UN human rights experts about government crackdowns on civil society and the media.

When she is conducting interviews, Vicheika often notices someone eavesdropping. At protests, she frequently sees the police taking photos of those who attend. She has been personally targeted with hateful and insulting comments on social media.

In April, while working for the Voice of America radio broadcasting Kann Vicheika, a Cambodian journalist. etwork at a press conference in Phnom Penh, she asked the Prime Minister a series of questions about conditions for the implementation of a state of emergency law. She immediately received offensive comments.

To better equip journalists to overcome these kinds of challenges, UN Human Rights in South-East Asia collaborated with UN Women and UNESCO to launch a training programme entitled “Enhancing the protection of women journalists and women’s human rights in the context of shrinking democratic space in Asia.”

The programme began on 10 December, on the occasion of Human Rights Day. It aims to raise the awareness of journalists and media workers and enable them to exchange experiences and build networks, thereby strengthening their protection capacities, including in the area of digital safety.

Vicheika is one of the 41 journalists and media workers from 15 countries in Asia who are participating in this seven-month, self-paced innovative programme, which includes live webinar sessions.

“Being verbally harassed in person and online by pro-government supporters or government officials is not new to me. I have sometimes experienced sexual harassment by journalists in field work, too,” she said.

“As a woman journalist working within a macho culture in Cambodia, [the programme] is a unique opportunity to join forces with other women and men who may have experienced similar types of harassment across the region. This training is very important for my work as a freelancer, trainer and Vice-President of the Board of Cambodian Journalists Alliance and for journalists in Cambodia, especially women journalists.”