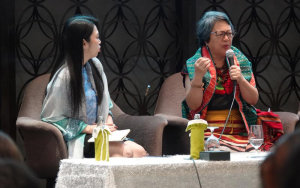 Two thirds of the world’s indigenous peoples – approximately 350 million people – are estimated to live in Asia. The distribution and diversity of such groups varies by country, as does the terminology used to identify them and the legal recognition accorded to them. Indigenous peoples, globally and in the region, remain subject to the most profound levels of discrimination, marginalization and violence and their traditional ways of life are at risk. Some of the key human rights challenges for indigenous peoples stem from lack of access to health, education and other basic services and pressures related to their land and natural resources as a result of activities associated with climate change, land use, development and the extraction of resources. While facing all the same risks as their male counterparts, indigenous women, children and youth face specific threats and violence, compounded by multiple forms of discrimination based on race, gender and other forms of identity, including disability and sexual orientation.

Against this background, the Regional Office carries out a range of country-specific and regional activities to recognise, promote and protect the rights of indigenous peoples in compliance with the UN Declaration on the Rights of Indigenous Peoples. The Office provides support for legislative and policy initiatives and focuses on specific matters of concern to indigenous peoples, for example in relation to climate change, environment and human rights, business and development projects and access to justice and remedy. The Office engages with governments, indigenous peoples, National Human Rights Institutions and other stakeholders to influence the development and strengthening of laws, policies and practices that impact indigenous peoples’ rights and promotes good practices for the protection of these rights.

Furthermore, the Office facilitates engagement of indigenous communities and organizations with the UN human rights bodies and mechanisms and especially those bodies that focus on indigenous peoples’ issues, such as the Special Rapporteur, Permanent Forum and the Expert Mechanism. 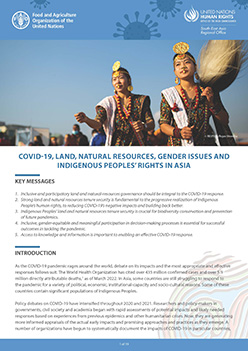 As the COVID-19 pandemic rages around the world, debate on its impacts and the most appropriate and effective responses follows suit. The World Health Organization has cited over 435 million confirmed cases and over 5.9 million directly attributable deaths,1 as of March 2022. In Asia, some countries are still struggling to respond to the pandemic for a variety of political, economic, institutional-capacity and socio-cultural reasons. Some of these countries contain significant populations of Indigenous Peoples.