“Climate change is a reality that now affects every region of the world. The human implications of currently projected levels of global heating are catastrophic. Storms are rising and tides could submerge entire island nations and coastal cities. Fires rage through our forests, and the ice is melting. We are burning up our future – literally.”

Climate change threatens the effective enjoyment of a range of human rights including those to life, water and sanitation, food, health, housing, self-determination, culture and development. States have a human rights obligation to prevent the foreseeable adverse effects of climate change and ensure that those affected by it, particularly those in vulnerable situations, have access to effective remedies and means of adaptation to enjoy lives of human dignity.

Through a broad range of activities, the Regional Office actively advocates for a human rights based approach to guide State’s climate actions and environmental policies with a focus on the principles of participation, non-discrimination, and right to remedy and reparation as well as vulnerable populations; supports climate and environmental rights defenders work; engages with the UN human rights mechanisms on environmental rights and climate change; and cooperates with other UN agencies and National Human Rights Institutions on issues related to human rights, the environment and climate change. 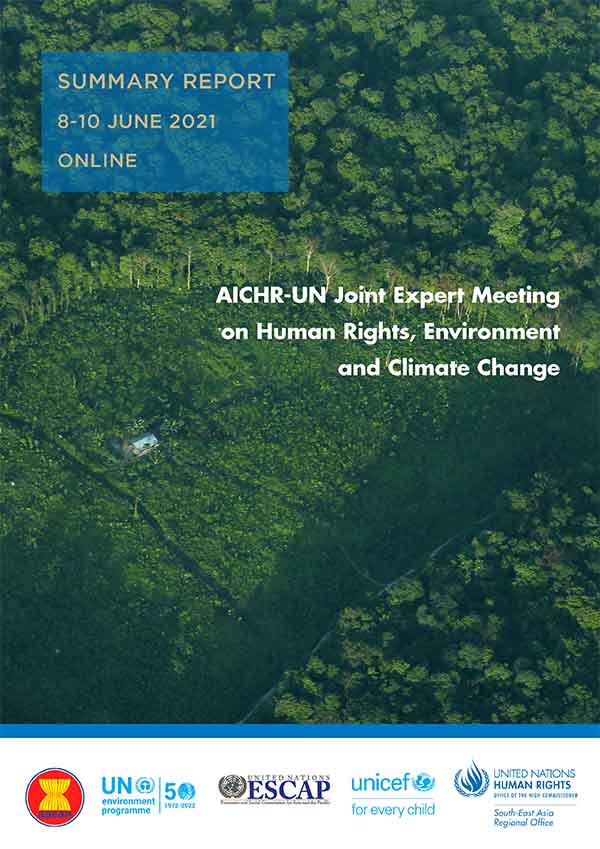 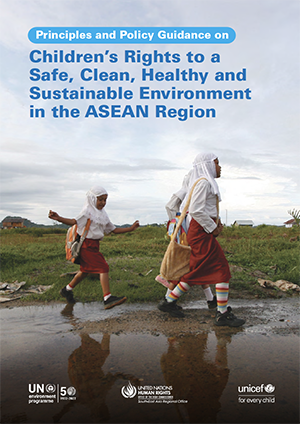 Principles and Policy Guidance on Children’s Rights to a Safe, Clean, Healthy and Sustainable Environment in ASEAN

This document, a collaboration between OHCHR, UNEP and UNICEF, sets out fundamental principles for realizing children’s rights to a safe, clean, healthy and sustainable environment and for putting the best interests of children at the center of initiatives by all segments of society in Southeast Asia. It was developed through a consultative process with experts in the fields of child rights and environmental issues, including children and youth from across the region. 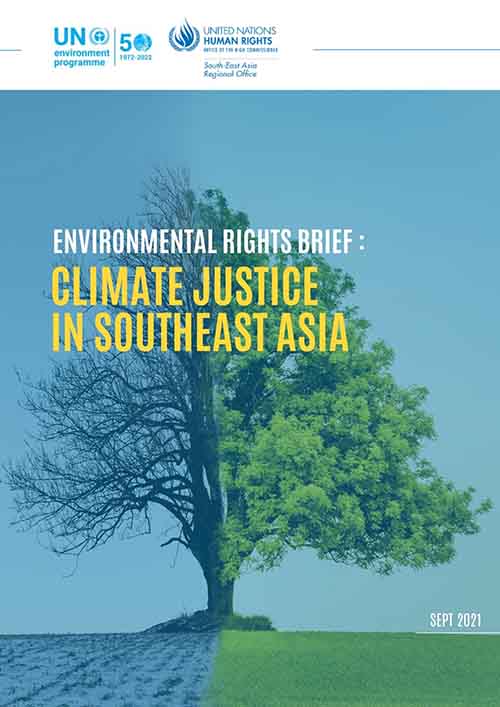 Southeast Asia is one of the most vulnerable sub-regions to climate change impacts. Its population of 640 million people faces risks such as extreme weather events and rising sea levels. Climate justice acknowledges that certain groups are disproportionately affected by the impacts of climate change and it seeks to address these inequalities within all climate action 4 , including mitigation and adaptation strategies. Climate justice requires climate solutions grounded in human rights, equality and non-discrimination and the participation of those most affected. This must include accountability for polluters, redress for victims, and protection of the vulnerable in all prevention, response, mitigation and remedial measures. 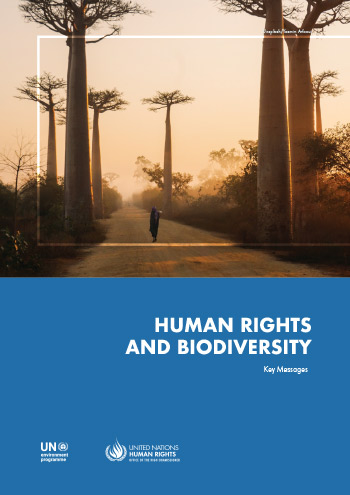 The planet is currently undergoing what scientists are calling the sixth mass extinction. This tragic loss of biodiversity is largely caused by human activity through, amongst others, land use change, climate change, pollution, overexploitation and invasive alien species. States have sought to take action on this issue through implementing the Convention on Biological Diversity (CBD), its protocols and targets, as well as other multilateral environmental agreements. Many have also undertaken a number of conservation efforts, including the establishment of parks, reserves, and protected areas and the mandating of environmental impact assessments. However, biodiversity loss continues, and it has become clear that the objectives of the CBD can only be met by instituting transformative economic, social, environmental, legislative, political and technological changes in a whole-of-society approach, one that protects and serves those who are most affected. This document highlights the key human rights obligations and responsibilities with respect to biodiversity-related agreements, policies, strategies and actions. 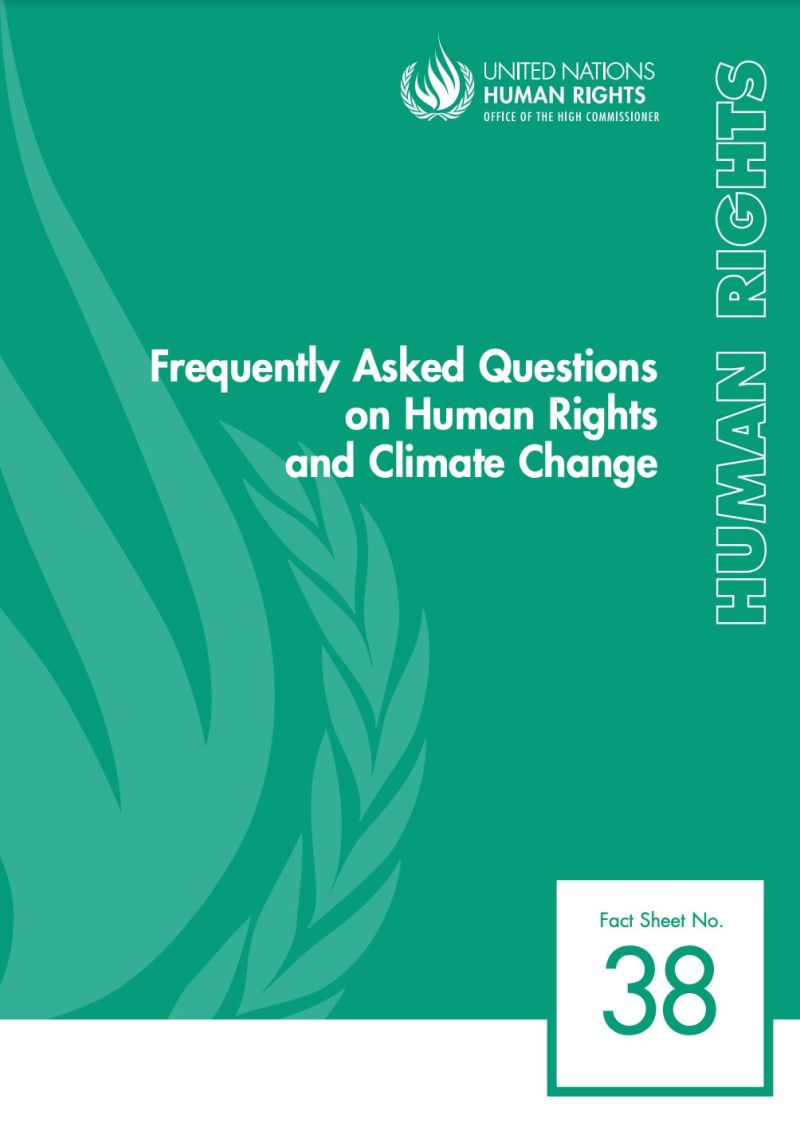 The Fact Sheet describes the linkages between climate change and human rights and highlights the obligations of States and businesses under international human rights law – both to mitigate climate change to prevent its adverse human rights impact and to ensure that everyone is able to adapt to the negative effects of climate change. It sets out the most comprehensive guidance on rights-based climate action issued by OHCHR to date, providing illustrative examples of climate litigation, the rights of future generations, and the role of international cooperation and solidarity in climate action. It also underscores how the global recognition of the human right to a safe, clean, healthy and sustainable environment may positively affect climate action. The Fact Sheet also provides an overview of the efforts of various human rights bodies and mechanisms to address climate change, including the Human Rights Council – and the role of the UN Framework Convention on Climate Change and its Conference of the Parties in promoting rights-based climate action. It offers recommendations for forward-looking, rights-compliant climate action at all levels – aimed at protecting both people and planet from the scourge of climate change in the years to come. 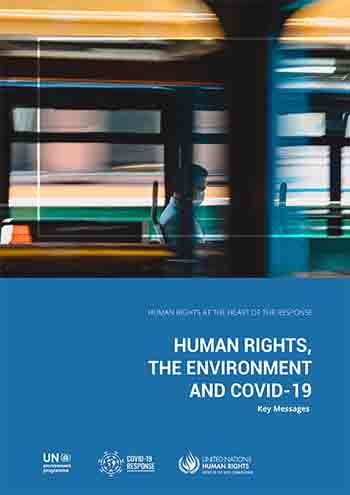 COVID-19 and the Environment: Key Messages

The COVID-19 crisis reveals a clear truth about catastrophic risk in an increasingly globalized world: an effective response requires immediate, ambitious and evidence-based preventive action at the international level. To avert future global threats, including pandemics, we must protect rights to a safe, clean, healthy and sustainable environment upon which we all depend for our health and wellbeing. A human rights-based approach to the COVID-19 crisis is also needed to address its unequal impacts on the poor, vulnerable and marginalized and its underlying drivers, including environmental degradation. The following key messages on human rights, the environment and COVID-19 highlight essential human rights obligations and responsibilities of States and others, including businesses, in addressing and responding to the COVID-19 crisis. 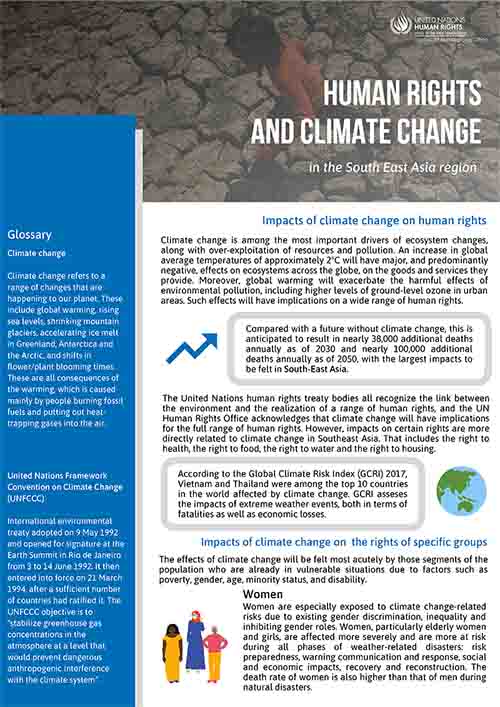 The Impact of Climate Change on Human Rights

Climate change is among the most important drivers of ecosystem changes, along with over-exploitation of resources and pollution. An increase in global average temperatures of approximately 2°C will have major, and predominantly negative, effects on ecosystems across the globe, on the goods and services they provide. Moreover, global warming will exacerbate the harmful effects of environmental pollution, including higher levels of ground-level ozone in urban areas. Such effects will have implications on a wide range of human rights. 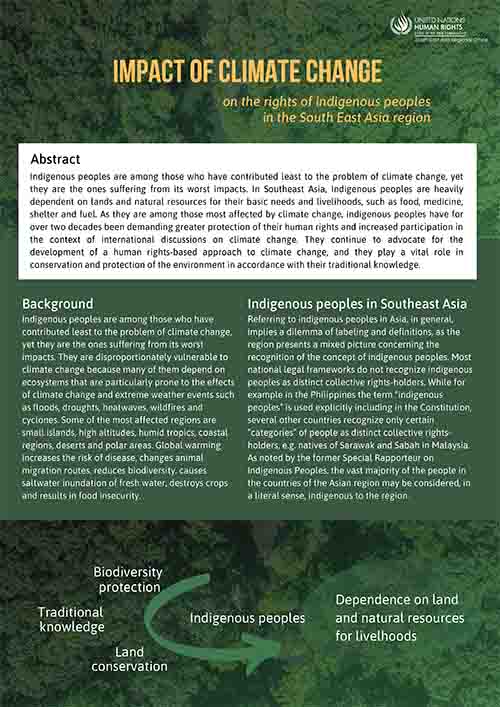 Indigenous peoples are among those who have contributed least to the problem of climate change, yet they are the ones suffering from its worst impacts. In Southeast Asia, Indigenous peoples are heavily dependent on lands and natural resources for their basic needs and livelihoods, such as food, medicine, shelter and fuel. As they are among those most affected by climate change, indigenous peoples have for over two decades been demanding greater protection of their human rights and increased participation in the context of international discussions on climate change. They continue to advocate for the development of a human rights-based approach to climate change, and they play a vital role in conservation and protection of the environment in accordance with their traditional knowledge. 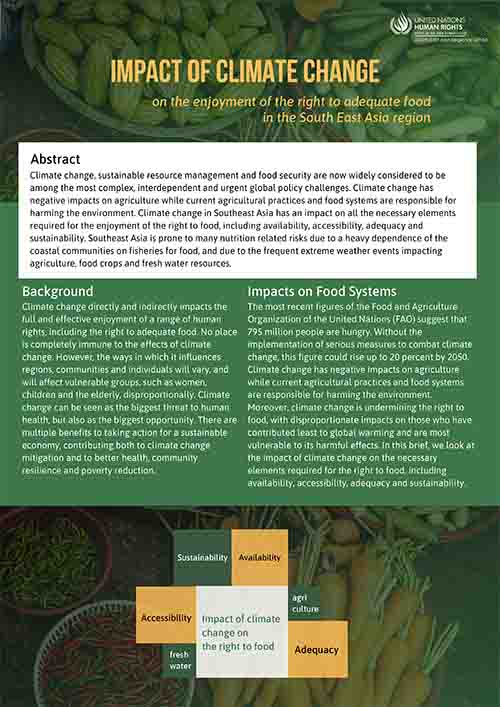 Climate Change and the Right to Food

Climate change, sustainable resource management and food security are now widely considered to be among the most complex, interdependent and urgent global policy challenges. Climate change has negative impacts on agriculture while current agricultural practices and food systems are responsible for harming the environment. Climate change in Southeast Asia has an impact on all the necessary elements required for the enjoyment of the right to food, including availability, accessibility, adequacy and sustainability. Southeast Asia is prone to many nutrition related risks due to a heavy dependence of the coastal communities on fisheries for food, and due to the frequent extreme weather events impacting agriculture, food crops and fresh water resources.