The Regional Office understands that a draft law has been re-submitted to the National Legislative Assembly for consideration and promulgation. Despite the Government’s decision in May 2016 to enact such a bill, the assembly shelved legislation in February 2017 which would have made enforced or involuntary disappearance and torture criminal offences.

“As matter of urgency we implore legislators to enact a strong law that fully complies with the international standards set out in the Convention against Torture and other Cruel, Inhuman or Degrading Treatment or Punishment (CAT) and the International Convention for the Protection of All Persons from Enforced Disappearance (ICPPED)” said Ms. Cynthia Veliko, OHCHR Regional Representative for South East Asia. “It is vital that this national legislation be adopted so that victims and their families have judicial recourse for these heinous crimes.”

The UN Working Group on Enforced or Involuntary Disappearances currently has 85 outstanding cases of enforced disappearances in Thailand since 1980.

As a State Party, the Government of Thailand has taken a number of steps to implement its obligations under CAT since its ratification more than a decade ago. In March 2017 Thailand committed to ratification of ICCPED during its review by the Human Rights Committee of the International Covenant on Civil and Political Rights (ICCPR).

“A number of the obligations laid out in these treaties are non-derogable, notably protection from torture and ill treatment and refoulement of any kind for cases where people could be at risk of these acts,” Ms Veliko said. “It is essential that these elements are fully articulated and incorporated into the domestic legislation and that the definition of all crimes be in line with international standards.”

OHCHR NEWS RELEASE: Thailand - OHCHR concerned with the lack of progress on the investigation of the enforced… 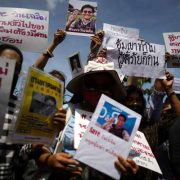 OHCHR NEWS RELEASE: In Thailand’s far south, OHCHR calls for protection of civilians and medics at all times
Tweets by OHCHRAsia