BANGKOK (13 September 2016) – The UN Human Rights Office for South-East Asia (OHCHR) welcomes the decision by the Thai Government to stop prosecuting civilian cases concerning security, sedition and lèse-majesté in military courts, ending a practice introduced after the military coup in 2014.

The High Commissioner for Human Rights had repeatedly expressed his concerns over the use of military courts to try civilians, and a number of countries had recommended ending the practice during Thailand’s human rights review at the Universal Periodic Review (UPR) in Geneva earlier this year.

On 12 September 2016, the head of the ruling National Council for Peace and Order (NCPO) issued a military order declaring all new cases would fall under the jurisdiction of the Court of Justice. The Order excludes ongoing cases in military courts, and retains the law enforcement powers of the military officials to search, arrest and detain.

“We are very encouraged by this decision as it is one of the key steps needed to restore democracy in Thailand, and will serve to strengthen the rule of law, good governance and human rights protection,” said OHCHR’s Acting Regional  Representative, Laurent Meillan. “However, as the Order is only applicable to new cases, we urge the Thai Government to implement it retroactively to ensure all civilian trials take place in civilian courts.” 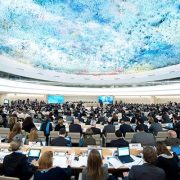