Reporting Back to Myanmar’s Rohingya: The Most Important Report of All

When the UN’s Independent International Fact-Finding Mission (FFM) on Myanmar completed a 444-page report last year documenting atrocities committed by security forces against Myanmar’s ethnic Rohingya minority, its experts reported to the Human Rights Council, the General Assembly, the Security Council, and a global audience via the media. Last month, the mission’s Experts took it upon themselves to report to the Rohingya themselves.

On a May 5 visit to Cox’s Bazar, Bangladesh, FFM Chairman Marzuki Darusman and Expert member Christopher Sidoti met with scores of refugees – the majority of whom had fled an explosion of violence in Myanmar’s troubled Rakhine State two years ago.

Most of those present asked about the slow pace of justice and said they were desperate to return home. Trapped inside a vast network of camps that have become the largest refugee settlement in the world (900,000 people), they complained they were being excluded from discussions over their future by governments and humanitarian organizations.

One man stood up to ask about some of the greatest challenges the exiled Rohingya now face: access to education, and jobs. “Our concern is what’s going to happen to the next generation,” he said. “If we’re stuck here … what will happen to them?”

A few minutes later, a woman stood up to thank the Experts for taking the time to listen.   “In Myanmar we never had the chance to speak about our rights and our demands,” she said, “and even here in the camps women especially don’t have that opportunity.”

The woman said the FFM’s report had helped inform the world about the “indescribable violence” the Rohingya community had experienced. She added: “we would like to know, how can this type of suffering be stopped from happening again?” 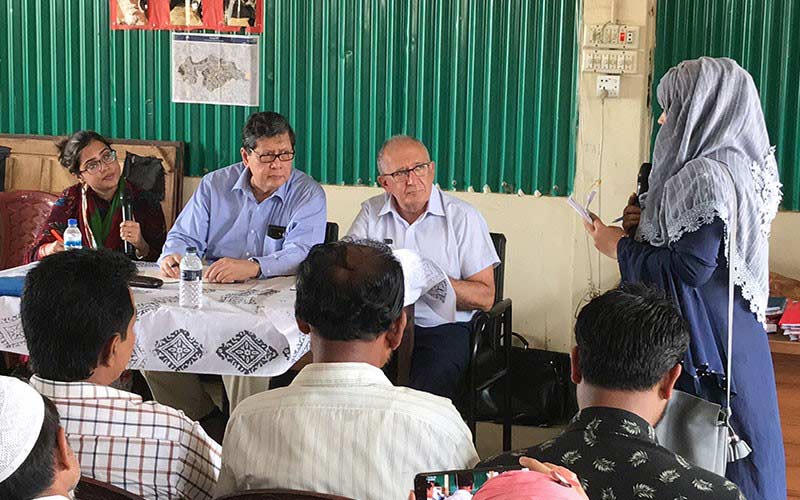 Investigative missions established by the Human Rights Council report primarily to UN member States in Geneva and New York. But because the FFM’s mandate was extended an additional year – it expires in September 2019 – the Experts had the opportunity to go back and meet with those they reported on.

“For us, this was the most important report back we’ve done,” Sidoti said. “Our report was the product of what they told us. Theirs are the stories we told. So we wanted to ensure that after their cooperation with us we had an opportunity to tell them what we found and what we recommended and what’s going to happen from here.”

“I hope very much that as a result of our experience this will become standard for Human Rights Council investigations,” Sidoti said, shortly after FFM staff handed out summarized copies of their 2018 findings. “The mandate given to the investigative teams should require a report, not just to UN mechanisms, but also to the affected communities.”

During their visit, the Experts held two meetings in the refugee camps, one exclusively with women. They also met with Rohingya on the Bangladeshi side of a strip of land at Konarpara, which straddles the Myanmar frontier, and heard new testimony from recent arrivals.

The trip was part of a 10-day journey through the region that began May 3 and ended with the Experts urging the international community to cut all financial ties to Myanmar’s military, saying its commanders needed to be “isolated” and brought before a credible court to answer charges of war crimes, crimes against humanity and genocide. 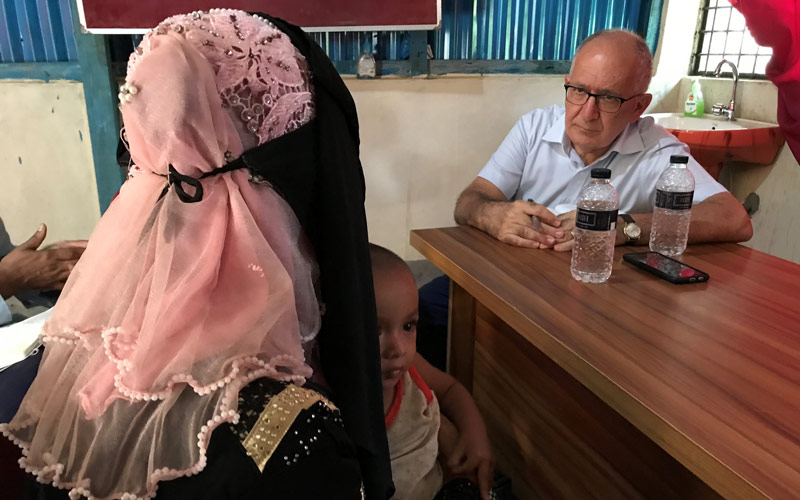 The Experts’ September 2018 report documented the systematic violation of human rights of ethnic groups across the country, including in Kachin and Shan States. But the report focused heavily on military ‘clearance operations’ in Rakhine State that started in August 2017, during which Myanmar security forces killed thousands of Rohingya civilians, raped and sexually abused women and girls and set their homes ablaze. The violence forced more than 700,000 Rohingya from the country, most to Bangladesh.

During their meetings in Bangladesh’s Kutupalong camp, some of the refugees asked what would happen next.

Darusman, who leads the FFM, assured them the Independent Mechanism for Myanmar, which was established by the Human Rights Council last year, would inherit their work and begin preparing case files for potential prosecution of alleged perpetrators of some of the gravest crimes under international law.

Darusman also said he would relay their concerns to the Human Rights Council in Geneva when they present their final report in September.

After leaving Bangladesh, the Experts also met with representatives from Kachin, Shan and Chin communities in Malaysia.

“It is important to us to ensure we can also report back to other ethnic groups whose testimonies we reflected in our report to the Human Rights Council last year. The plight of the Kachin, Shan and Chin communities remains of serious concern to the FFM,” Expert member Radhika Coomarswamy said.