BANGKOK (25 May 2016) – The UN Human Rights Office for South-East Asia (OHCHR) welcomes the decision by the Thai Government to enact a law to criminalize torture and enforced disappearances, and to ratify the International Convention for the Protection of All Persons from Enforced Disappearance.

“These decisions by the Government are positive steps toward meeting international human rights standards, and we urge the National Legislative Assembly to pass the torture and enforced disappearance law as a matter of priority,” said OHCHR’s
Acting Regional Representative, Laurent Meillan.

“For too long, there has been no accountability on cases of torture and involuntary and enforced disappearances due to the lack of legislative framework. But when this bill goes through torture and enforced disappearance will finally be criminalized, and victims and families will be able to pursue legal redress. Perpetrators of such heinous crimes can be prosecuted.”

The United Nations Working Group on Enforced or Involuntary Disappearances has 82 outstanding cases of enforced disappearances in Thailand.

As a further means to safeguard detainees from torture, the regional UN Human Rights Office urges the Government to allow the National Human Rights Commission of Thailand to independently monitor all places of detention.

OHCHR also calls on the Thai Government to promptly fulfill its commitment to ratify the Optional Protocol to the Convention against Torture (OP-CAT), which will allow for the establishment of the National Preventive Mechanism to undertake regular visits to places such as detention centres, prisons and similar facilities. During the Universal Periodic Review (UPR) of Thailand’s human rights record in Geneva earlier this month, Thailand said it planned to submit the OP-CAT treaty to the cabinet for ratification.

Thailand ratified the Convention against Torture and Other Cruel, Inhuman or Degrading Treatment or Punishment in 2007.

OHCHR NEWS RELEASE: Thailand - OHCHR concerned with the lack of progress on the investigation of the enforced… 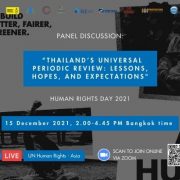