JAKARTA (3 May 2016) – “There should be more regional co-operation and networking between journalists to cover cross-border issues, and more journalism-skills training for journalists on how to cover rights issues in a more appealing way.” – Participant (name withheld on request), UN workshop on human rights reporting.

Journalists, civil society groups and government officials joined a workshop in Jakarta on human rights reporting, held as part of a programme of regional activities to mark World Press Freedom Day on 3 May 2016. The workshop was conducted by the UN Human Rights Office of South-East Asia, UNESCO and the Southeast Asian Press Alliance (SEAPA), and was attended by journalists and media studies students, representatives of civil society groups and government officials.

In the final session, participants took a human rights story of their choice and applied their newly acquired skills. The main task was to identify the applicable human rights principles and treaties, and then look at procedures for seeking redress. A representative from each group was tasked with pitching the story to a mock editorial meeting, presenting a 3-minute idea incorporating at least two human rights mechanisms.

During the course of the day, participants identified a range of issues of concern from their country, and shared ideas on how to cover sensitive topics.

“I think religion, gender and sexuality must be covered better, because there’s still a bias in media when they talk about these three issues,” said one participants.

Another added that journalists should be covering cross-border issues such as women and child trafficking and sex tourism.

The UN Human Rights Office for South-East Asia is planning to offer the course in other centres around the region. 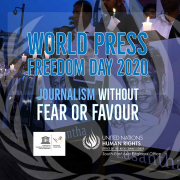