GENEVA (12 April 2021) – A UN expert called on the Government of Lao PDR to immediately release three human rights defenders who have been detained for more than five years, saying their continued imprisonment was an impediment to the advancement of human rights in the South-East Asian nation.

A court in the capital, Vientiane, sentenced Ms. Lodkham Thammavong, Mr. Soukane Chaithad and Mr. Somphone Phimmasone to prison terms of up to 20 years in 2017 after they took part in a demonstration outside the Lao Embassy in Thailand to express concerns over the government’s human rights record. The three, who were arrested in March 2016, had also posted messages on social media criticizing the Government.

“I am deeply concerned that these three human rights defenders have been criminalised and sentenced respectively to 12, 16 and 20 years imprisonment in retaliation for their legitimate human rights work and criticism of the Government’s alleged human rights violations, corruption and deforestation.”

“The Government must provide the legal and factual basis behind the arbitrary arrest and incommunicado pre-trial detention of Ms. Lodkham Thammavong, Mr. Soukane Chaithad and Mr. Somphone Phimmasone,” Lawlor said. “The Government should also explain the the harsh prison sentences handed down to these human rights defenders, and how these are compatible with international human rights norms and standards.”

Ms Mary Lawlor, (Ireland) is the Special Rapporteur on the situation of human rights defenders. She is currently an Adjunct Professor of Business and Human Rights in Trinity College Dublin. She was the founder of Front Line Defenders – the International Foundation for the Protection of Human Rights Defenders. As Executive Director from 2001-2016, she represented Front Line Defenders and had a key role in its development. Ms. Lawlor was the Director of the Irish Section of Amnesty International from 1988 to 2000, became a Board member in 1975 and was elected Chair from 1983 to 1987.

Special Rapporteurs are part of what is known as the Special Procedures of the Human Rights Council. Special Procedures, the largest body of independent experts in the UN Human Rights system, is the general name of the Council’s independent fact-finding and monitoring mechanisms that address either specific country situations or thematic issues in all parts of the world. Special Procedures’ experts work on a voluntary basis; they are not UN staff and do not receive a salary for their work. They are independent from any government or organization and serve in their individual capacity. 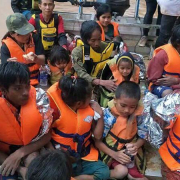