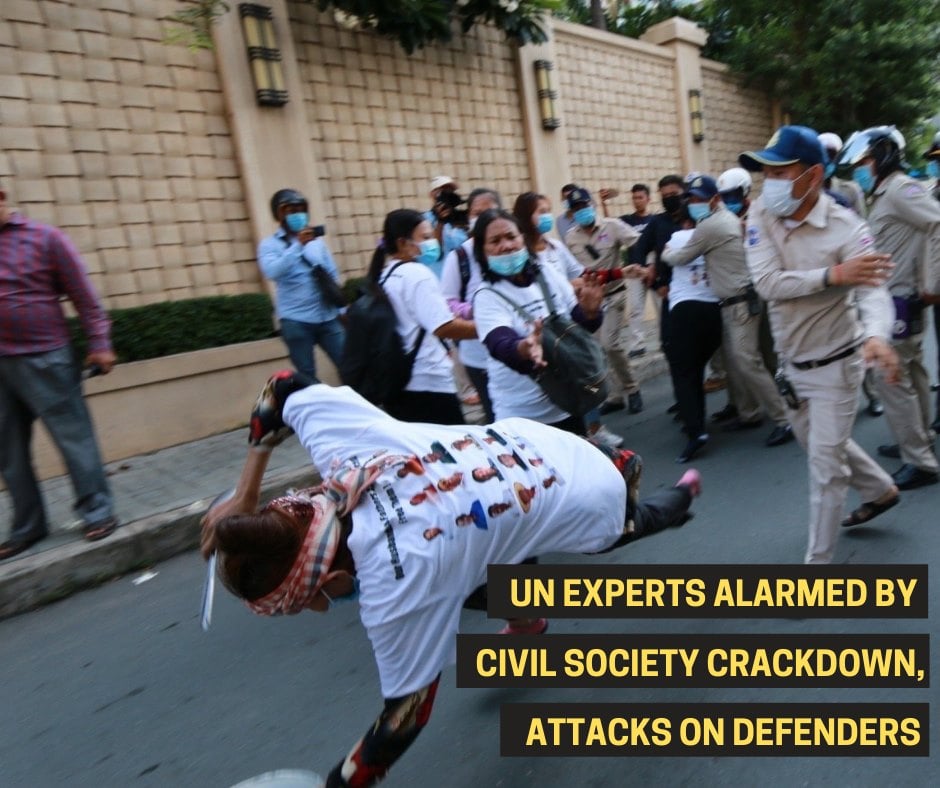 GENEVA (16 November 2020) – UN human rights experts* today expressed concerns about tightening restrictions on civil society in Cambodia, and called for an immediate end to the systematic detention and criminalisation of human rights defenders, as well as excessive use of force against them.

“I have reviewed publicly available footage where excessive force has been used by the security forces to prohibit human rights defenders, many of them women, from exercising their rights to peaceful assembly. Promotion and protection of human rights through peaceful means is not a crime.”

Lawlor referred to several cases in which detention has reportedly been used to punish human rights defenders for carrying out their work. Human rights defender Rong Chhun was arrested on 31 July after taking up the case of farmers in Tbong Khmom who had their land taken in connection with a border demarcation between Cambodia and Viet Nam. Subsequently, several other human rights defenders who demonstrated against his detention were also arrested. Twelve remain in pre-trial detention, have been denied bail, and are facing charges punishable by up to two years in prison.

“Human rights defenders should never be criminalised for their courageous efforts to protect the rights of others,” said Lawlor. “I am increasingly concerned by the circular pattern of detaining them for advocating against the detention of or violations against fellow defenders. This cycle must end.”

Lawlor also expressed concerns about the detention of environmental defenders, the use of violence against families of detained activists, and the case of a Buddhist monk who was defrocked for his human rights activities. Another two human rights defenders monitoring a demonstration were threatened for filming the arrest of peaceful protesters. Trade union leaders were also subjected to threats over their plans to strike, and some civil society groups say they have been harassed at their offices by visiting officials.

“There seems to be no limit to who the authorities will target, making their actions in recent months appear as a concerted attempt to erode civic space and stifle the work of human rights defenders,” said Lawlor.

“I am seriously concerned that the impact on civil society will be lasting and urge the authorities to end this harmful approach to human rights defenders and facilitate freedom of expression and assembly, for the benefit of all members of society in Cambodia,” said Rhona Smith, the UN Special Rapporteur on the situation of human rights in Cambodia.

“As highlighted in my report to the General Assembly, the United Nations system has a vital role to play in supporting all human rights defenders, including those in Cambodia, who are exposed to risk,” added Lawlor.

Ms Mary Lawlor, (Ireland) is the Special Rapporteur on the situation of human rights defenders. She is currently an Adjunct Professor of Business and Human Rights in Trinity College Dublin. She was the founder of Front Line Defenders – the International Foundation for the Protection of Human Rights Defenders. As Executive Director from 2001-2016, she represented Front Line Defenders and had a key role in its development. Ms. Lawlor was the Director of the Irish Section of Amnesty International from 1988 to 2000, became a Board member in 1975 and was elected Chair from 1983 to 1987.

Ms Professor Rhona Smith (United Kingdom) was appointed as Special Rapporteur on the situation of human rights in Cambodia by the UN Human Rights Council in March 2015.